South Commuter Railway: Closing the Distance Between Workers and Jobs

A study shows the planned railway will increase access to more and better jobs in 48 cities and municipalities in Metro Manila and Southern Luzon.

How does better transportation affect employment? One way is by improving job opportunities. However, standard methods for evaluating the economic viability of transport infrastructure projects typically do not account for such benefits. Instead, these focus on savings from reduced travel time and vehicle operating costs. The result is that the economic rate of return of a project is often underestimated. While this may not matter much for large projects, it can have implications on how projects are prioritized within a country. Moreover, with the increasing role of public-private partnerships in infrastructure development, capturing a wider range of benefits can inform better pricing and taxation policies.

Take the case of the South Commuter Railway (SCR) project in the Philippines, which will connect Metro Manila with Laguna province. Using spatial analysis tools, we looked at how the project can improve accessibility to more and better jobs. Our analyses show that residents of at least 48 cities and municipalities stand to benefit from a faster and more reliable mass transit system once the railway becomes operational. On average, households will have access to 300,000 more jobs within an hour’s commute.

The SCR is part of the 163-kilometer North-South Commuter Railway (NSCR), which envisions seamless rail travel from New Clark City in Tarlac province in the north to Calamba City in Laguna in the south. The northern segments of the NSCR are under construction and scheduled to begin partial operations in 2022. Meanwhile, the SCR is in the advanced stage of the procurement process.

The SCR is seen as a gamechanger in the transport network of Metro Manila and its neighboring areas. It will follow the alignment of the Philippine National Rail (PNR) line connecting Metro Manila with Laguna, and it will link to the three light rail transit lines in the metropolis.

The current mass rail transit systems have not been able to keep up with the daily commuting needs of millions of workers from within the metropolis and its suburbs. Analysis from the Asian Development Bank (ADB) using Google Maps from 2019 revealed Metro Manila to be the most congested city among megacities in developing Asia.

The SCR is designed to have 19 stations, stretching 54.6 kilometers from Blumentritt in the heart of the City of Manila to Calamba (Figure 1). The railway passes through 10 of the most vibrant and densest cities of the Philippines. Satellite imagery of nighttime lights suggests that 64 cities and municipalities altogether stand to benefit from the project because of the interlinked nature of their economic activities.

Once operational, the SCR will allow riders from Calamba to get off at Blumentritt station within just 1 hour, compared with the 2- to 3-hour travel by bus or the close to 3-hour commute on the PNR line. 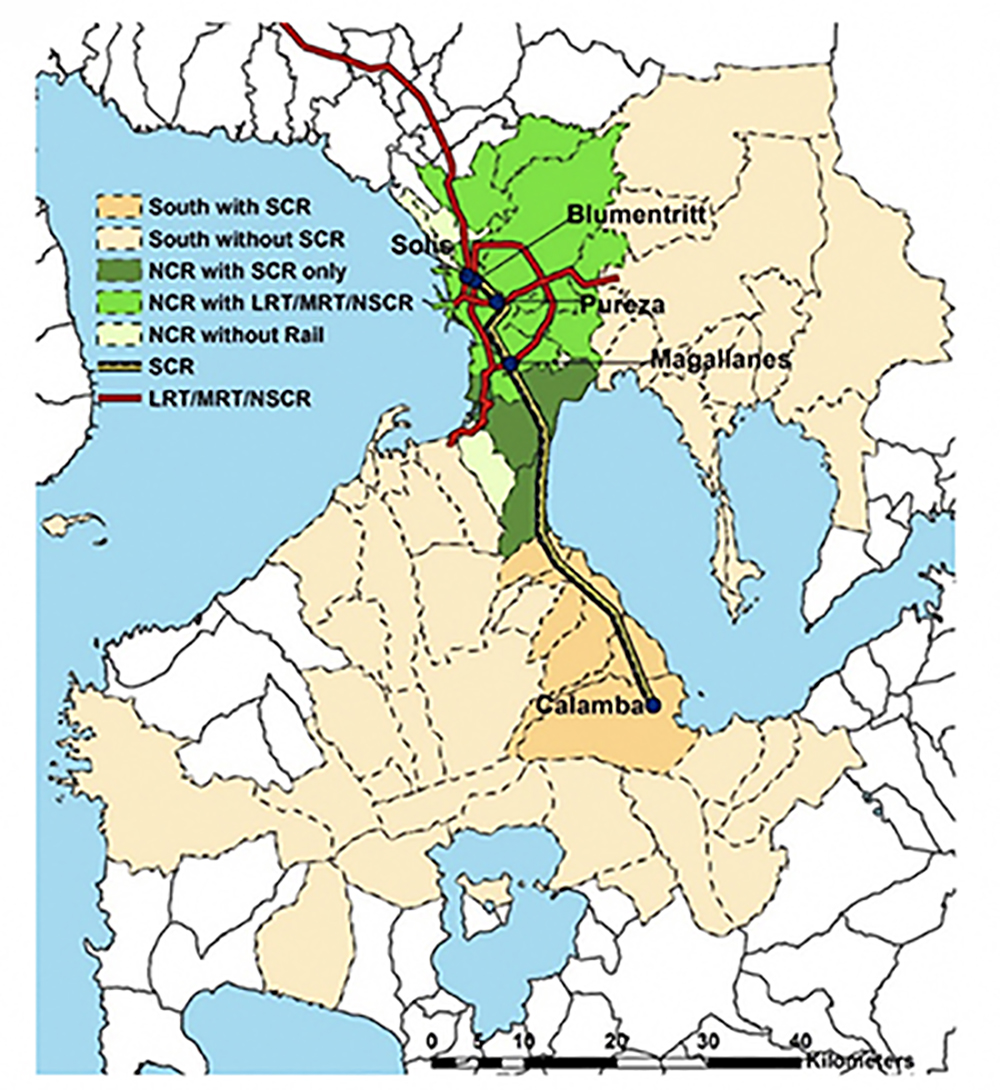 To see how the SCR can improve the levels of job accessibility, it is essential to understand first the uneven distribution of jobs and industries in the catchment area, which includes 17 cities in Metro Manila and 47 cities or municipalities in Laguna, Batangas, Cavite, and Rizal provinces in Southern Luzon region. These are the cities or municipalities that have access to the SCR or could potentially be affected by it.

By connecting the two regions, the SCR can improve their residents’ access to jobs and thus increase overall productivity. Those with access to the rail line can explore a wider range of job opportunities that used to be beyond a reasonable commuting time. Residents of Metro Manila will have easier access to manufacturing jobs in the south, while those living in the south can commute faster to Metro Manila by rail to work in the service sector. Wage comparisons suggest that reduced travel costs may encourage more industrial workers from the south to work in Metro Manila in either industries or services to earn a higher income. In the meantime, some manufacturing firms in Metro Manila may move to the south, where labor costs are lower, if their managers can commute more easily to the south. Both shifts could help equalize the industrial wages in the two regions.

We studied the potential increase in job accessibility by comparing the number of jobs within a 1-hour commute before and after the completion of the SCR. This exercise shows that the number of jobs that are easily accessible via road transit is highly unequal between the two regions. For example, commuters in Makati City in Metro Manila can access as many as 5.4 million jobs whereas those in the south can access as few as 31,000 jobs only. The discrepancy in job accessibility comes mainly from the high concentration of jobs in Metro Manila as well as the slow and unreliable commuting options between these regions.

The SCR has the potential to narrow the gaps in job accessibility levels. Commuters from 48 out of the 64 cities and municipalities can travel to a wider area within a 1-hour window and access more job opportunities. On average, households in the catchment area can reach 300,000 more jobs within an hour via the SCR than via road transport. Job accessibility levels will increase by 15.3% in the southern areas and by 8.5% for Metro Manila households (Figure 2). For instance, a household in San Pedro City in Laguna will be able to access 3.4 million jobs via rail transport, compared with only 2.03 million jobs by road—a 67.5% increase in job opportunities. 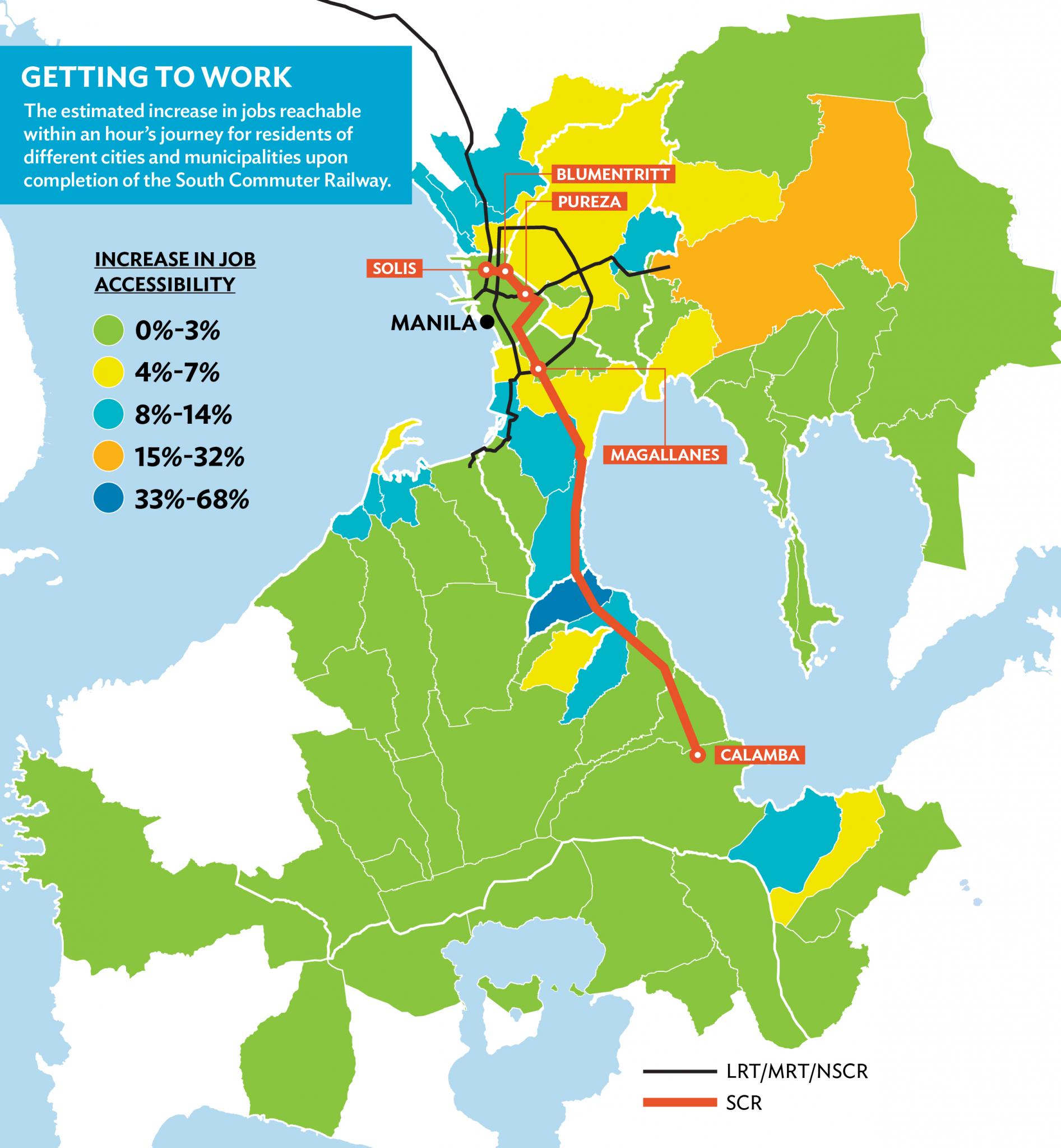 Crucially, the accessibility gains are not only in terms of a wider range of jobs but also in terms of quality—better pay and greater stability. Reducing the spatial mismatch between workers and jobs can be an important development tool. Our estimates for the catchment area suggest that fewer jobs coincide strongly with higher poverty rates. Furthermore, analysis using census data shows that users of the current rail service are predominantly from the wealthier third- and fourth-income quintile. Operated efficiently and priced optimally, the SCR service will encourage people across more income groups to shift to rail as their transport mode of choice.

Higher levels of job accessibility only partially account for the full potential of the SCR to reshape the regional economy. The wider economic benefits of the SCR (and more broadly, efficient urban transportation) extend far beyond the time when people start to move to get to better amenities and firms relocate. Accompanied by necessary policy reforms and complementary infrastructure, improving mass transit could also lead to a significant increase and more efficient distribution of urban land value. Quantifying these benefits is worth further study as an efficient urban transport system is vital in making a city more livable. Considering the high job concentration and mobility challenges shared by other mega cities in developing Asia, the replicability of this study lends itself well to gain additional insights under the context of other cities in ADB's developing member countries.

Liming’s research interests include urban economics, transport infrastructure, and international trade. He obtained his Ph.D. in Economics from the University of California, Santa Barbara in the United States, and his bachelor’s degree in Economics from Fudan University in the People’s Republic of China.

Eugenia’s main research interests are agriculture, trade, and transport economics. She holds a PhD in Economics from the University of Sussex, United Kingdom.

Yi’s research focuses on urbanization, infrastructure, and economic development. He received his Ph.D. in Economics from the University of Maryland, College Park in the United States, and his bachelor's degree in Economics and Finance from Zhejiang University in the People’s Republic of China.


The Asian Development Bank is committed to achieving a prosperous, inclusive, resilient, and sustainable Asia and the Pacific, while sustaining its efforts to eradicate extreme poverty. Established in 1966, it is owned by 68 members—49 from the region. Its main instruments for helping its developing member countries are policy dialogue, loans, equity investments, guarantees, grants, and technical assistance.

Leave your question or comment in the section below:

How to Use Transportation as a Catalyst for Economic Growth

How Aerial Cable Cars Can Boost Mobility in Cities

Efficient City Transport for Those Who Do Not Own Cars

The views expressed on this website are those of the authors and do not necessarily reflect the views and policies of the Asian Development Bank (ADB) or its Board of Governors or the governments they represent. ADB does not guarantee the accuracy of the data included in this publication and accepts no responsibility for any consequence of their use. By making any designation of or reference to a particular territory or geographic area, or by using the term “country” in this document, ADB does not intend to make any judgments as to the legal or other status of any territory or area.

How Feasible Is a High-Speed Railway in India?

Efficient City Transport for Those Who Do Not Own Cars

How to Use Transportation as a Catalyst for Economic Growth

How Aerial Cable Cars Can Boost Mobility in Cities